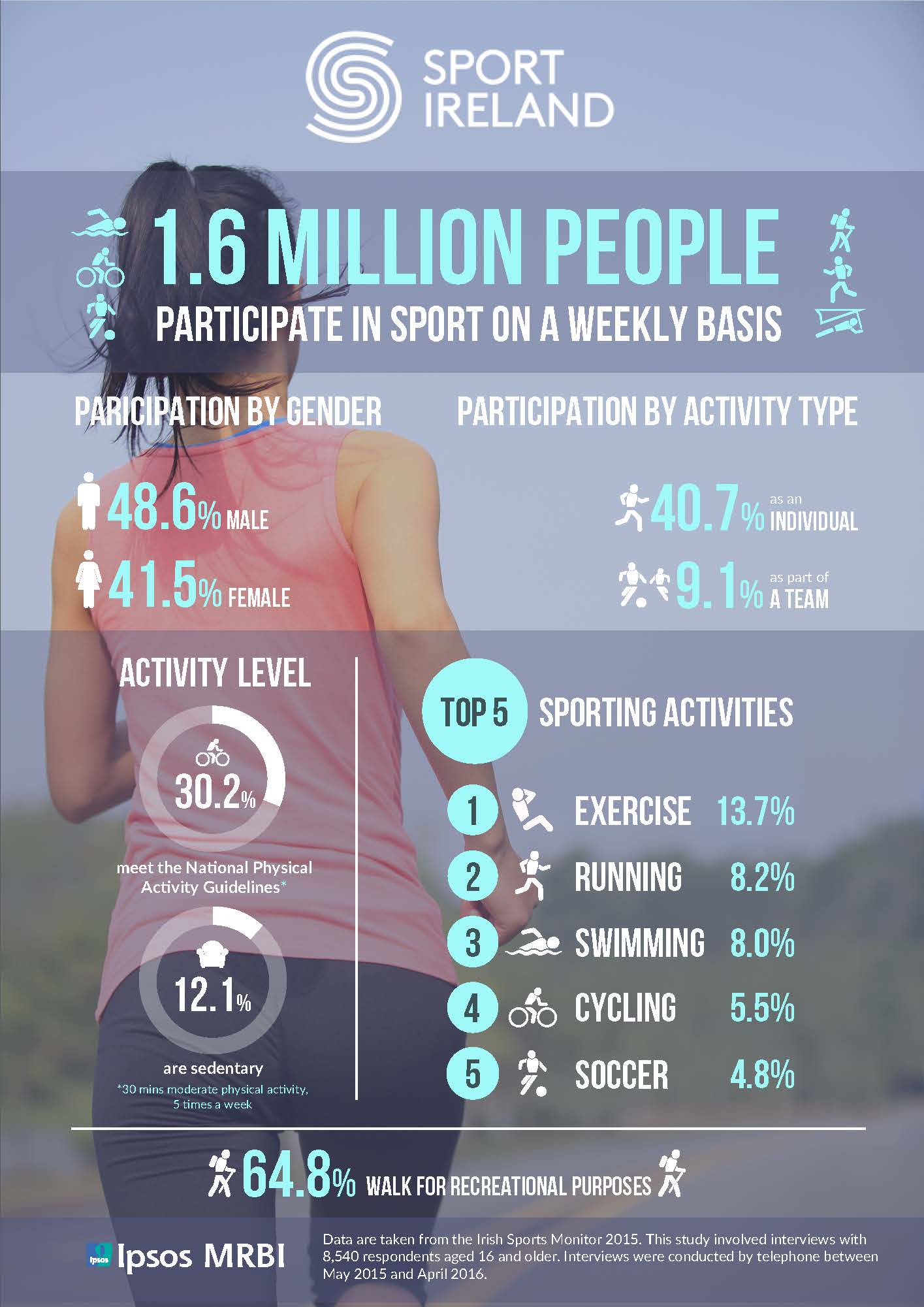 Minister of State for Tourism and Sport, Patrick O’Donovan TD, today launched the sixth Irish Sports Monitor report, for the year April 2015-April 2016. The report, written by Ipsos MRBI on behalf of Sport Ireland, measures adult participation in sport and physical activity and compares it with information published for previous years.

The report shows that 45% of the adult population participate regularly in sport equating to approximately 1.6 million people benefiting from the physical, mental and social benefits obtained from participating in sport.

Speaking at the launch, Minister O’Donovan commented: “The Irish Sports Monitor provides us with vital insights into the role sport plays in not just encouraging healthier, more active lifestyles, but also in fostering community spirit and developing social capital right across the country. In that regard, it is encouraging to see such strong numbers engaging in sport through volunteering, club membership and attendance at sporting events.”

Kieran Mulvey, Chairman of Sport Ireland commented “I am delighted to see that the report also shows strong levels of social participation in sport through volunteering, club membership and attendance at sporting events. Team sports such as Gaelic football, soccer and hurling/camogie have the largest numbers of volunteers. Social participation in sport is very important, not just in terms of supporting sport and sporting organisations but also in maintaining the social fabric in Irish communities.”

John Treacy, Chief Executive of Sport Ireland, said: “This report shows that the level of sedentarism continues to decline and the latest figure of 12.1% is the lowest since the Irish Sports Monitor was initiated in 2007. However we cannot afford to be complacent. Following a number of years where we have seen increasing levels of involvement in sport, the current report has identified a slight decline in participation from 2013 driven primarily by improved economic conditions and associated time pressures on particular groups. Understanding the factors behind this decline is important in allowing us to focus attention on these groups. Sport Ireland will continue its work to increase participation in sport and reduce the level of sedentarism with a range of programmes and initiatives implemented through the National Governing Bodies and Local Sports Partnerships.”

Kieran O’Leary, Research Director, Ipsos MRBI, added: “The Irish Sports Monitor continues to demonstrate the significant role of sport in Irish society with 1.6 million people actively playing sport each week, and a similar number having another role through volunteering, attending an event or being a member of a club. However, differences exist across the population and challenges remain in increasing sports participation, particularly amongst females, older age groups and those not in paid employment.”

The full Irish Sports Monitor can be found on www.sportireland.ie

The 2015 ISM report was written by Ipsos MRBI on behalf of Sport Ireland. It provides information on active participation in sport and recreational walking, club membership, volunteering and attendance at sporting events as well as information about walking and cycling for transport.

The 2015 ISM report was based on telephone interviews conducted throughout the year (April 2015 – April 2016) with 8,540 adults aged 16 and over in the Republic of Ireland. Give the large sample size the ISM also provides an opportunity to assess participation by age, gender, socio-economic status, etc.