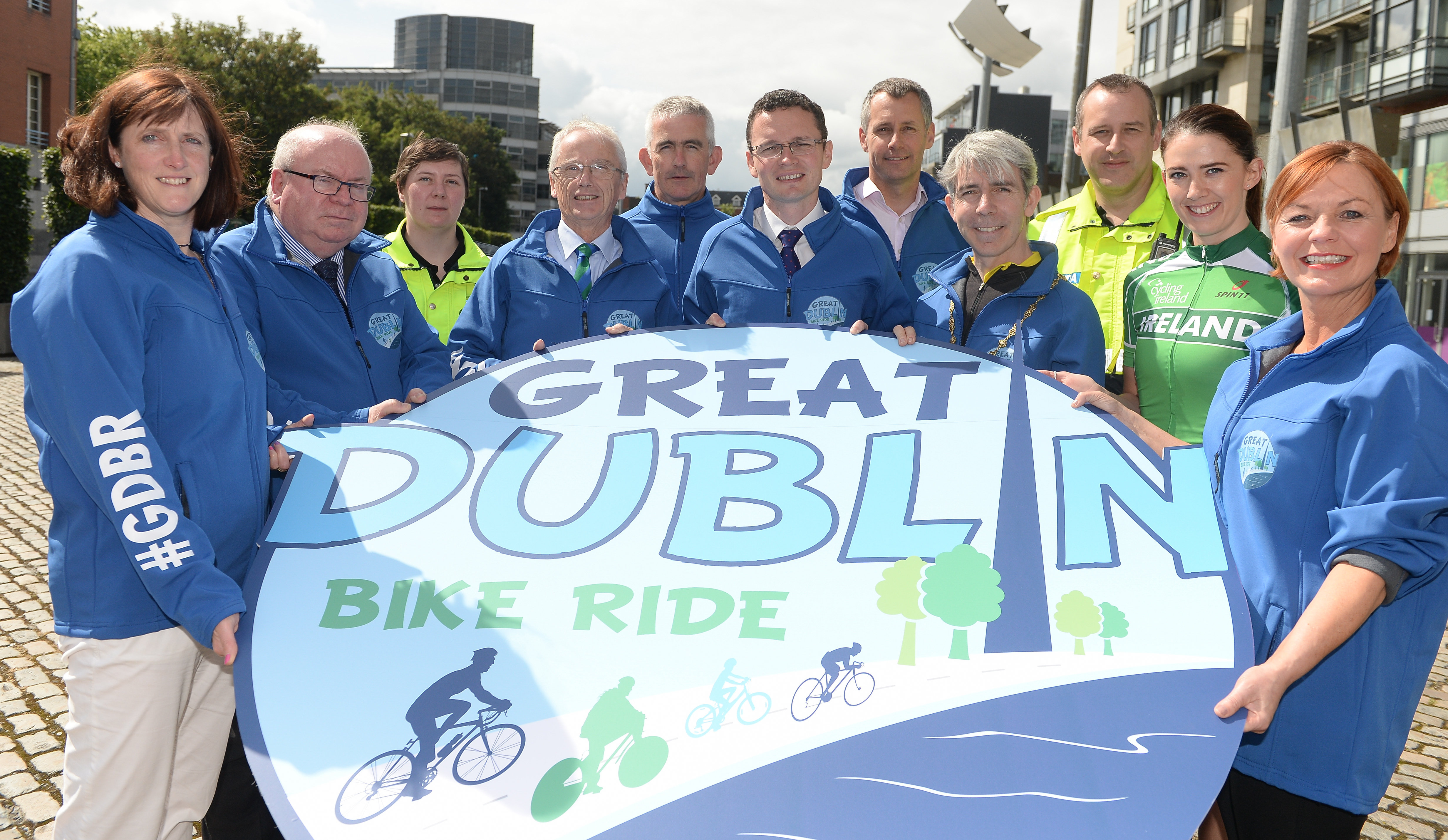 Up to 5,000 cyclists expected to take part in the 2nd Great Dublin Bike Ride

Following the success of Great Dublin Bike Ride last year, Minister of State for Tourism and Sport, Patrick O’Donovan, TD today (Thursday) announced the event will return on September 11th, bigger and better than before. The Great Dublin Bike Ride is an initiative from Sport Ireland who work in conjunction with Dublin City Council, Healthy Ireland, Fingal County Council, Cycling Ireland and Meath County Council to create the only cycling event of its kind to happen in Dublin. This year’s event, part of the Community Participation strand of Ireland 2016, is an opportunity for people of all ability, young and old, to take to their bicycles and join in this celebration of our centenary year.

On Sunday 11th September 2016, up to 5,000 riders will set out from Smithfield in Dublin to take part in the second Great Dublin Bike Ride. The event offers two unique scenic routes; a 60km route for those looking for a slightly less strenuous day in the saddle and a challenging 100km route for experienced riders. The Great Dublin Bike Ride will be a flagship event in Ireland for the European Week of Sport (10 – 18th  September) and welcomes cyclists of all abilities to take part.

The first 2,000 people to sign up for this year’s #GDBR16 will receive an exclusive newly designed jersey. All other entrants will receive a sporting Great Dublin Bike Ride tech top. Registration is now open at www.greatdublinbikeride.ie.  Last year 3,000 people took part in the inaugural Great Dublin Bike Ride including over 28 nationalities from around the world. Thirty counties in Ireland were represented on the day with participants ranging from 17-73 years old.

Speaking at the launch of the Great Dublin Bike Ride, Cllr. Andrew Montague, representing the Lord Mayor of Dublin Brendan Carr said “On behalf of the Lord Mayor of Dublin and Dublin City Council,  I am delighted to welcome the Great Dublin Bike Ride to the streets of the capital for a second year. The number of people cycling in Dublin city continues to grow year on year and this event is a great opportunity to showcase Dublin as a cycle friendly city.”

Minister of State for Tourism and Sport, Patrick O’Donovan, TD, said: “I am delighted to announce the launch of the 2016 Great Dublin Bike Ride. Following the success of last year’s event, I hope that the 2016 Great Dublin Bike Ride will see even greater numbers participating.  This event provides a tremendous opportunity for people to participate in a unique event based on physical activity and community engagement. I would encourage as many people as possible to take part in this event and in any of the other events planned for our National Week of Physical Activity and Sport in September”.

Minister for Health, Simon Harris, TD said: “Being active has many benefits for physical and mental health. The emphasis in the Great Dublin Bike is on enjoyment and participation is open to all levels of cyclist. Cycling is growing in popularity and I hope all the participants enjoy this fun event. The Great Dublin Bike Ride is a great example of cross-sectoral cooperation and partnership and I am delighted that my Department is working with Sport Ireland, Cycling Ireland and the local authorities in the Dublin region on this exciting event to promote cycling.”

Chief Executive of Sport Ireland, John Treacy, said: “Last year’s edition of The Great Dublin Bike Ride was a fantastic occasion with over 3,000 cyclists taking part. Mass participation events such as this are a great way to keep people of all ages and abilities active. I look forward to seeing even more people take part this year and I would encourage everyone to sign-up and get involved”.